The kitchen is one of the most moisture filled areas in a home. Lots of steam is created as you cook, boil water in the kettle, and when you open the dishwasher after a cycle has ended!

Instead of opening a window and releasing this steam outside, this moist air is often left to circulate the kitchen area. In turn, the hot air finds its way into kitchen cupboards and creates dampness.

Damp isn’t just unsightly, it’s also a real terror to get rid of. It makes cupboards smell stale and funky, and it attacks your food supplies. It’s a very unwelcome visitor.

What Causes Damp in Kitchen Cupboards?

Damp can be caused by many different things. However, in the case of kitchen cupboards it’s typically caused by warm, humid air coming into contact with a cold surface, and this air then turning into water droplets, also known as condensation.

Discover more about this, and what else could be causing dampness in your kitchen cupboards below. 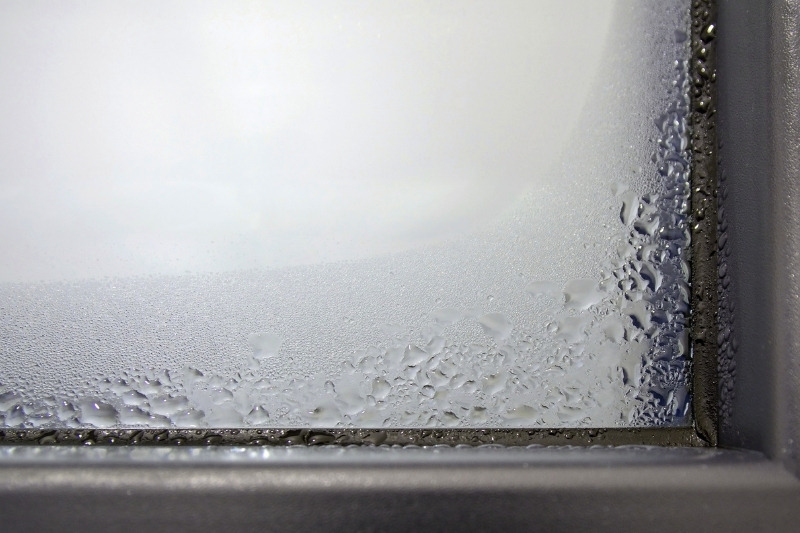 Condensation is created when water vapour (steam) turns back into its liquid state (water). And it’s one of the most common causes for dampness in kitchen cupboards.

It’s likely that hot steam, typically from boiling pots on the stove and from a boiling kettle, finds its way into kitchen cupboards and settles on the back of the cupboard.

The back of a cupboard is usually a wall, and in a lot of homes the wall in question is an external wall that may or may not have been insulated properly, and will likely be cold to touch.

If the steam lands on a poorly insulated wall, the warm steam will touch the chilly surface and will turn into water droplets, hence condensation. These droplets will start running down the wall and will start to cause damp patches to form.

In a lot of homes, this process goes by unnoticed, so the dampness continues to creep in until the issue is blatantly obvious and has to be treated.

In addition to condensation, poor air flow in kitchen cupboards can also cause dampness.

This chaotic environment means that air doesn’t really flow in, out and around the cupboard as freely as it would like to.

Which, in turn, means that hot air, like the steam mentioned above, often gets trapped in this environment. And because this warm air hasn’t got anywhere to go, it sticks onto the surrounding surfaces and eventually causes dampness.

Interestingly, an insufficient drainage system can also cause rising damp in homes.

Drains are supposed to carry dirty water away from a house, however, if the drains in question are corroded, blocked or broken, the water in the pipe might not be able to drain away effectively.

This undrained water then puts unnecessary pressure on the drain’s pipework. This, in turn, creates a very moisture-ridden environment where damp can thrive.

As a result of this, damp can start to spread itself more and more around the kitchen area because it’s in an ideal climate and environment.

Another potential cause of damp is that there could be a leak in or near the kitchen cupboards.

Kitchens are full of various pipes that bring and take water away from various appliances, like the washing machine, the dishwasher, the tap and radiators.

And with so many pipes around it’s not uncommon for an aged pipe to burst, or for a pipe to be knocked out of place, and to start leaking.

If treated quickly, a leaky pipe shouldn’t cause too much damage to a home. But if a leaking pipe is left to lose water, it can wreak havoc.

Water that’s just left to sit stagnant not only becomes smelly, but it can also encourage rising dampness. This can then cause mould and mildew to form all over surfaces, and it can also rot flooring and kitchen cupboards.

Although leaking pipework is a common cause of dampness, you should also check the kitchen for any structural damage that could be allowing water to leak into the room. Check for any gaps or small holes in the roof, for example.

How to Get Rid of Damp from Kitchen Cupboards 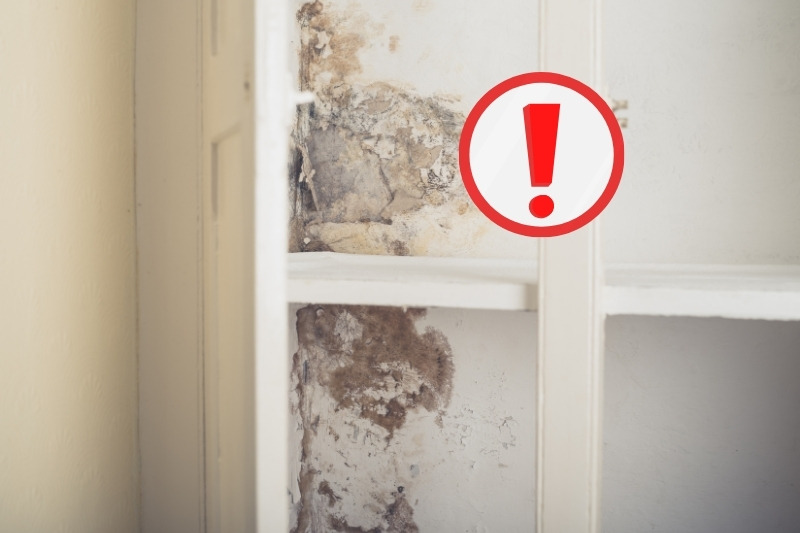 First, find the root of the problem

If you see a damp patch spreading throughout your kitchen cupboards, the first step you need to take is to try and figure out where the damp is coming from.

If you don’t find out where the damp originated from, you might end up on a bit of a wild goose chase, and all you’ll do is treat the symptoms of the problem, rather than eradicating the problem.

Just take a step back to assess what’s going on in your kitchen cupboards – the cause may be more obvious than you think!

The problem is likely caused by one of the following:

Once you’ve established where the damp issue has come from you can proceed to treating the problem effectively. 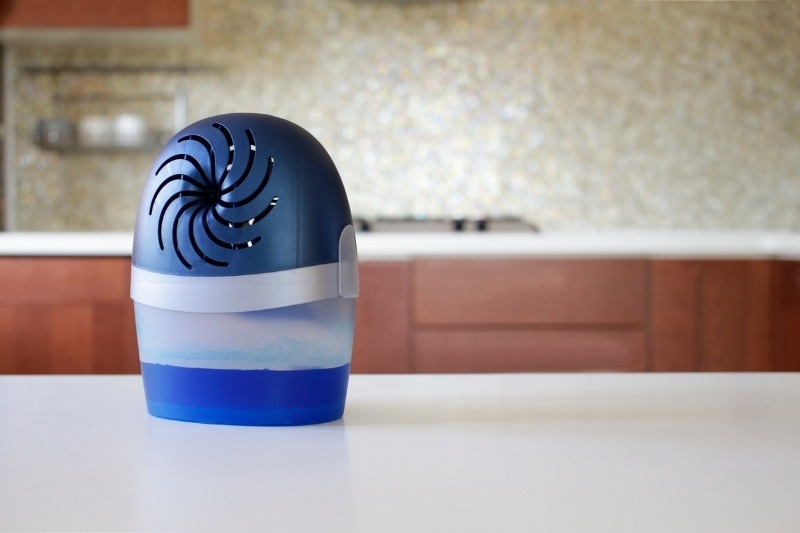 For condensation related issues, you need to:

For poor air flow related issues, you need to:

For drain-related issues, you need to: 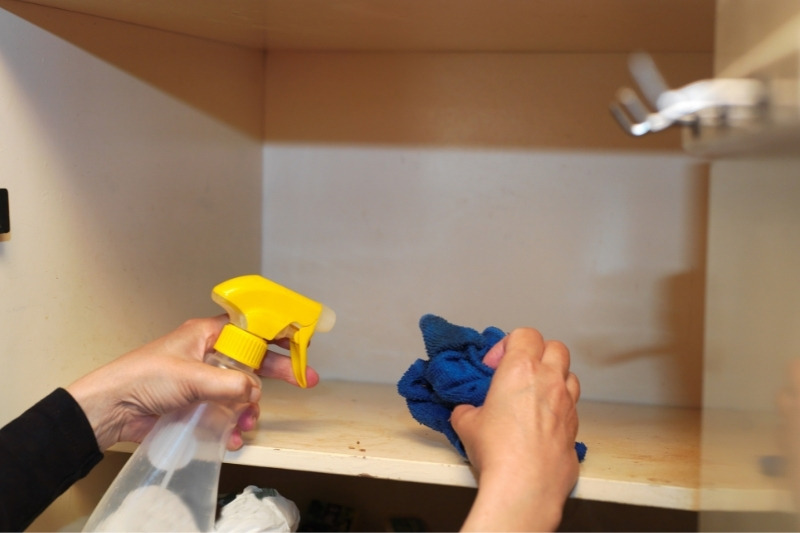 For leak-related issues, you need to:

In addition to the above you will also need to carry out the following steps when getting rid of damp in kitchen cupboards.

One of the key steps when dealing with damp is to actually clean it off a surface.

To do this you can buy a damp cleaner and follow the instructions on the bottle. Or you can create your own bleach-based cleaning solution at home.

Simply mix one part chlorine bleach with three parts water in a tub, soak a cloth in the water, wring it out and start blotting at the infected areas.

Once the cleaning session has ended, the area needs to be left alone to dry.

Note: You can still clean away the damp even if you’re waiting for a builder to come and do some repair work for you. It’ll make the kitchen cupboards look and smell appealing in the meantime.

In addition to cleaning off the damp, you could also apply a damp sealer to the back of the cupboard. This will give the cupboard some more protection.

Polar Damp Seal is one option you can look into. This 500ml can come in different colours, so you can choose a colour that’ll suit the kitchen cupboards.

You must leave the sealer to dry before you add your items back into the unit. And once this is done you should consider painting the cupboard with an anti-mould paint.

The anti-mould paint will add another layer of protection to the kitchen cupboard.

One final thing you might have to do is replace some kitchen cupboards if they are very damaged. Particularly any backing boards that may have been plagued by the damp.

But this is something to consider once you’ve cleaned and treated the dampness.

It is pointless replacing damaged parts before treating the damp, because the damp will keep on coming back and will continue to ruin the units.

You must always treat and eradicate dampness first, and only then can you consider replacing any damaged cupboards.

How to Keep Moisture Out of Drawers 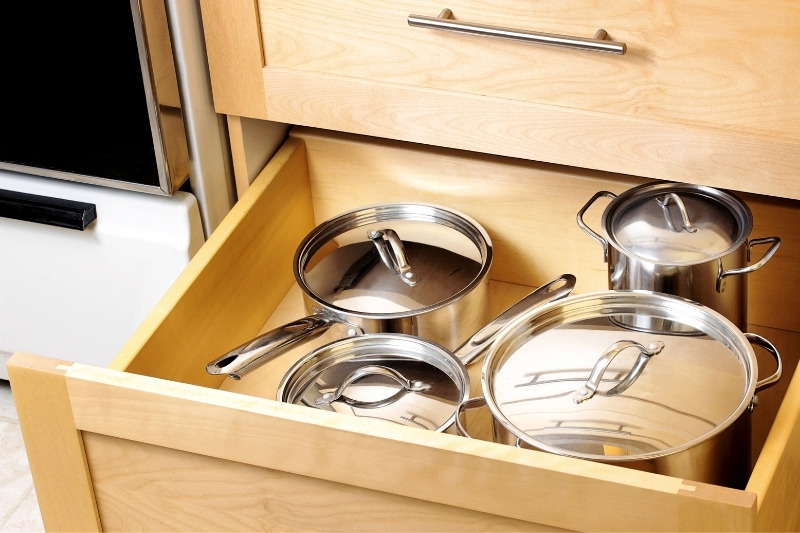 Drawers, like kitchen cupboards, can also be troubled by dampness. And to resolve the issue, follow the points listed above.

Make sure you have sufficient air flow, limit the amount of condensation in the room, and check for structural problems that could be causing the damp. Once you find the cause you can treat the dampness effectively.

Yes, opening a window will reduce dampness as long as it isn’t raining outside.

If it is raining, and this moisture finds its way indoors, this can cause dampness to form.