Wasps are one of the most annoying and potentially dangerous types of insect going. Not only can they end up building huge nests on your property, but they tend to be aggressive by nature too.

Wasps will sting if they feel threatened or if they believe you are invading their territory, and worst of all, you rarely encounter a truly solitary wasp.

It is important to note that there are multiple species of wasp. The paper wasp is the most common type, but some people may also encounter yellow jackets and both red and black hornets.

Regardless of the species of wasp, they are all very social insects that live in colonies. Paper wasps are generally tame unless they feel threatened, but yellow jackets and hornets can be much more aggressive.

Whilst most people who come across a lethargic or dying wasp might think it’s a good thing, it is important to be aware that just because they are dead, it doesn’t mean you are safe from venom.

If you stood on or accidentally caught the stinger of a dead wasp, it will still release the venom. 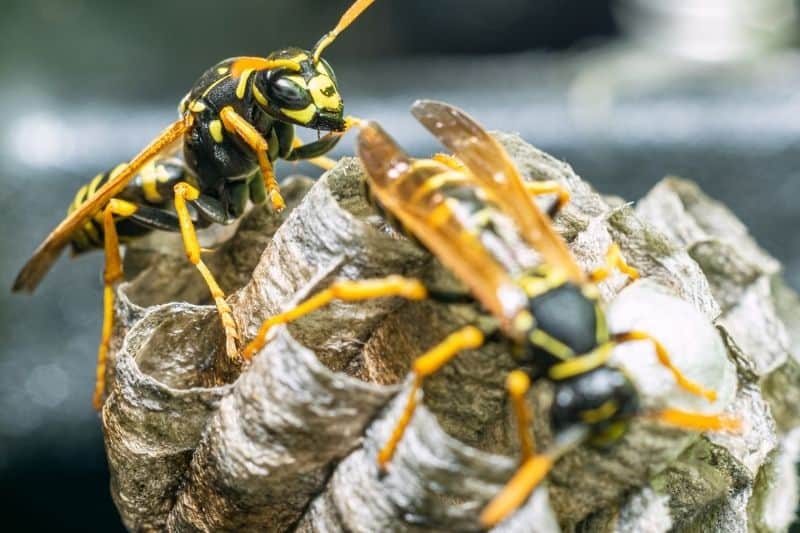 Life Cycle of the Wasp

Understanding the life cycle of the typical wasp can help you to understand why wasps are coming into your home when they are.

It is unlikely that you will see an active wasp nest in the winter months, and the only wasps that are usually encountered are queens hibernating and waiting out the cold.

When spring comes around, the queens will come out of hibernation, and start looking for a new location to build a nest.

Many queens do die in hibernation, but this is usually down to predation by other insects such as spiders rather than the cold itself.

Whilst we might sometimes like a warmer, milder winter, these are bad for queen wasps. Warmer winters mean that the queens come out of hibernation earlier and end up starving due to a lack of available food.

It’s commonly believed that wasps eat insects, but this isn’t the case. The mouths and digestive systems of wasps are not actually capable of eating any solid foods.

Instead, they have a series of tubes designed to suck liquids, such as nectar, much like a honeybee has.

The mandibles are instead used to bite other wasps (in defence or in attack), or to catch and dissect prey to feed their young.

The wasp larvae then regurgitate a sugary liquid that is made up of the chitin from the insect exoskeletons that is then fed back to the adult wasps.

Once a queen that has survived the winter months has started building a new nest, she will create cells in which she will lay eggs, in a similar structure to that found in a beehive.

Once the eggs begin to hatch, she will find food to feed them whilst also building more cells and laying more eggs. The protein-rich insect diet means that young wasps grow up very quickly.

Once the first generation of adult wasps have grown up, they will take over building the nest and caring for the young. This leaves the queen free to lay more eggs and control the nest.

Towards the end of the summer, the nests reach their maximum size, and the queens will lay queen eggs and unfertilized drone eggs. Each nest can produce between 1000 and 1500 new queens.

Once these eggs have laid, the reigning queen will not lay any further eggs. Once these last eggs have hatched, the male drones and new queens will travel from the nest to mate.

The males recognise queens from their own colony and avoid mating with them to prevent interbreeding.

After mating, the new queens find somewhere to hibernate, and the male drones die.

Why Do I Have Lethargic Wasps?

There are a range of reasons that you might encounter lethargic wasps in your home, and in all these scenarios, it is likely that you have a nest nearby that you may have missed whilst it was active in the summer months.

It is assumed that wasps usually make their nests outside, however they are quite common in sheds, lofts, and other sturdy wooden spaces.

Wasps can build their nests in unexpected places as they can be shaped around or in between wooden beams and other obstacles.

If you’re finding an abundance of dead or dying wasps in your home, it is possible that the wasps are preparing for winter and clearing out the nest.

Dying wasps in this instance are quite often found around windows and walls where they have dropped from nests buried deep out of sight.

A lack of food is the reason that wasp nests die off in the winter months. During summer, nectar is a good source of food, and this disappears as the cold comes.

Adult wasps do also eat the sugary fluid produced by the larvae, and come the end of the season, the young have all grown up, so this food source disappears too.

Some larger nests can survive throughout winter, but only if they have an adequate food source.

If you’re finding one or two lethargic wasps, it is likely you have stumbled across queens that have come out of hibernation too early.

Queens should wake up when spring comes around, but if the weather is unexpectedly warm and they wake up early, they end up starving due to a lack of suitable food. 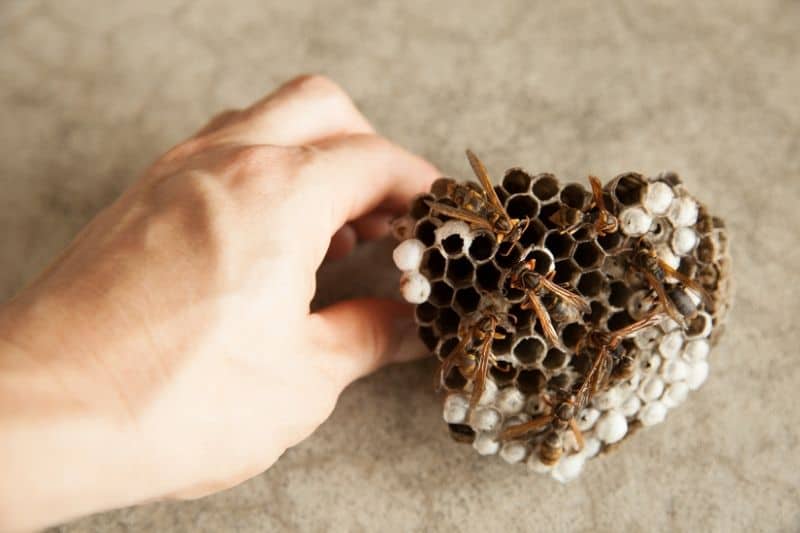 One of the best ways to deal with a large number of lethargic wasps is to call a professional.

If you are always finding wasps on the floor throughout your home, it is likely that you have a nest somewhere that you just didn’t come across during the summer months.

If there are only a few, you may be able to deal with the problem with a trusty bottle of wasp spray and a hoover.