Sodium percarbonate, or sodium carbonate peroxyhydrate, might have a long, ominous sounding name, but it is actually a useful, environmentally friendly substance that can be used all around the home.

What Is Sodium Percarbonate?

Sodium percarbonate is a very concentrated powder that can be used to kill all manner of bacteria, moulds, dirt and mildew, to name just a few. This one chemical can be used to tackle a variety of cleaning chores, both in the home and outside.

Sodium percarbonate is also known as oxygen bleach, and is made from sodium carbonate and hydrogen peroxide. When dissolved in water, sodium hydroxide will break down into simply oxygen, water, and sodium carbonate, or soda ash. 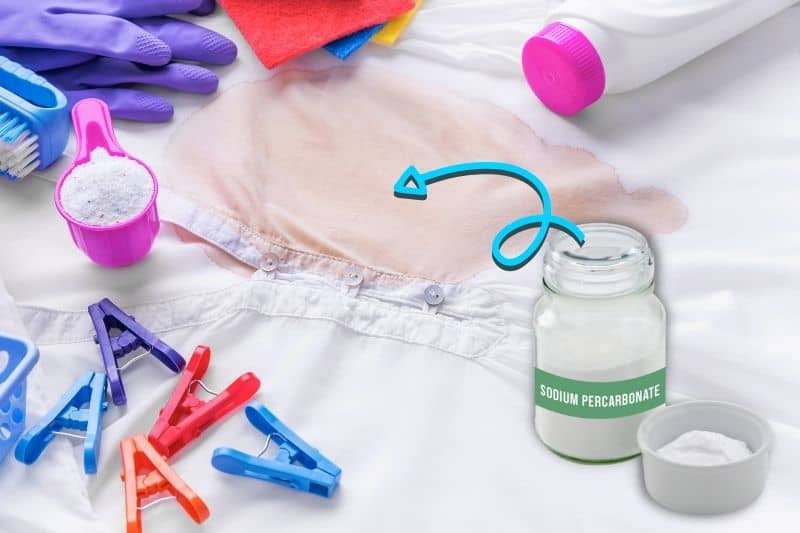 The bleaching action of sodium percarbonate means that it can be used as a stain remover or laundry booster. Oxygen bleach is already included in many off-the-shelf stain removers, but you can also simply add it to your laundry yourself.

If you need to whiten your laundry or tackle light staining, sodium percarbonate can be used as a laundry booster. Simply add around 2 tablespoons to the washing machine dispenser along with your regular detergent, and run the cycle as normal. If the staining is heavier, add an extra 2 tablespoons.

Sodium percarbonate can also be used to pre-soak clothing. Mix about 4 tablespoons with 5 litres of warm water, and make sure that the chemical has fully dissolved before adding in your laundry. The bleach should remain active for about 4 to 5 hours, at which point you should discard it.

Sodium percarbonate will do a great job on most materials, however it should not be used on delicates such as silk or wool. 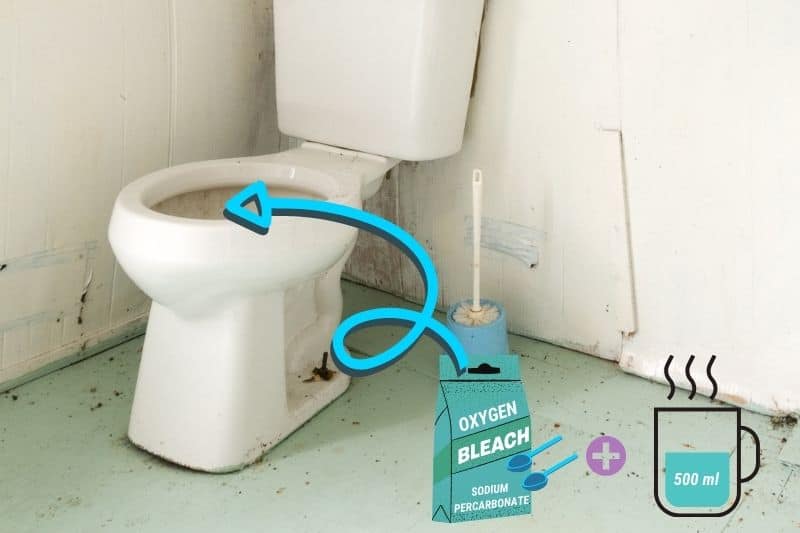 Cleaning the bathroom or toilet is one of those chores that no one ever wants to tackle. Fortunately, this is another chore that sodium percarbonate can help out with.

In addition to one-off cleans, sodium percarbonate can also be used to make a multipurpose spray that can be used all around your bathroom.

To make the spray, you will need:

To make the spray, first mix the sodium percarbonate with the water until dissolved thoroughly. Stir in the washing up liquid, and essential oils if you are using them. Tip into the spray bottle and use around your bathroom immediately as needed.

Be aware that the sodium percarbonate will fizz when you mix it with water, so make sure that you are mixing the solution in a large enough container to avoid spills.

Use 3: Tiles and Grout 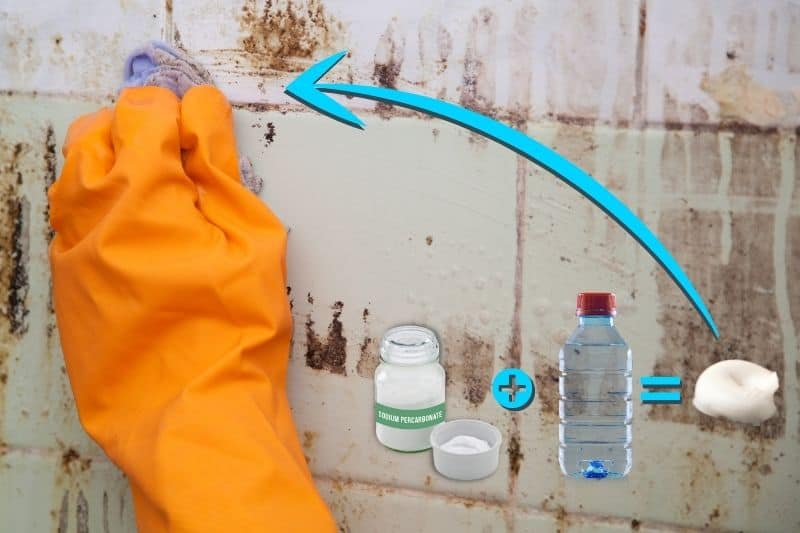 Tiling and grout can really quickly end up black with mould, mildew or just general dirt, regardless of where they are in your home.

Leave the paste to work for about 10 minutes, then rinse thoroughly with warm water. If the staining is stubborn, use an old toothbrush to scrub at the problem areas before rinsing. 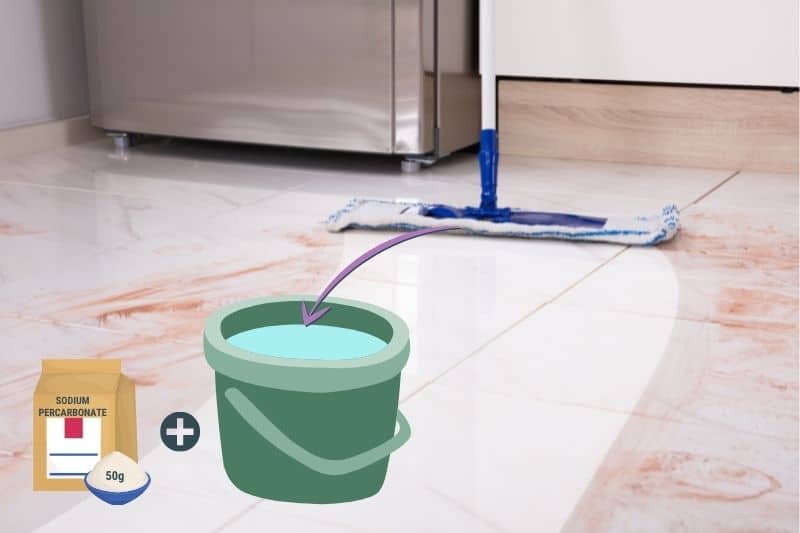 Like in the bathroom, sodium percarbonate can be used to tackle a variety of kitchen cleaning jobs. It can clean, disinfect, and deodorise, making it the ideal alternative to commercial chemicals.

If you make the sodium percarbonate into a paste, you can use it to tackle stained chopping boards or work surfaces.

A sodium percarbonate spray can be used to clean fridges or freezers, or even kitchen bins.

When it comes to kitchen utensils, soak them in a bowl of warm water with a tablespoon of sodium percarbonate.

If your sinks or drains have started to smell or just seem less than fresh, put the plug in, then sprinkle in a couple of tablespoons of sodium percarbonate. Add hot water, then wipe the solution around the sides and bottom of the sink. Leave the solution for a few minutes, then take the plug out and rinse the sink.

When it comes to cleaning the floor, simply dissolve 50g of sodium percarbonate in a bucket of hot water, and mop the floor as normal.

Use 5: Decking and Patios 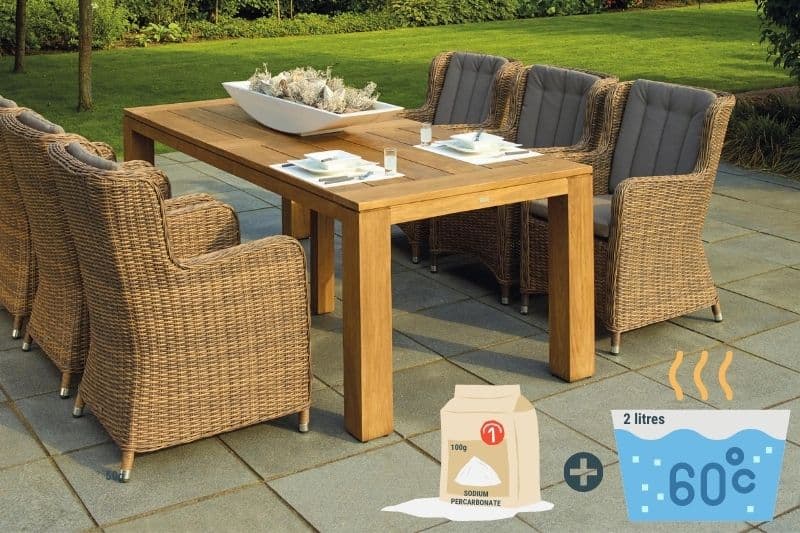 As sodium percarbonate is incredibly effective at killing bacteria and mould, it makes a great patio or decking cleaner; able to tackle moss and dirt with ease.

To use sodium percarbonate to clean your decking or patio, you will need:

Before getting started, run over the area with a brush or broom to get rid of any loose debris, such as leaves or rubbish.

To make the solution, first, dissolve the sodium percarbonate in the hot water.

Once the sodium percarbonate has dissolved, apply the solution to the surface using the mop or cloth and leave it to work for between 30 and 60 minutes.

Once the time has elapsed, scrub the decking thoroughly using the stiff brush, then rinse the residue away using a hose.

Each litre of water should clean approximately 5m² of decking or patio.

Like with any new cleaning product, test it out in an inconspicuous area before committing with a full clean. You should also make sure you take adequate precautions to keep the chemical out of reach of children or pets as you would with any other cleaning chemical in your home.

To work, sodium percarbonate must be mixed with hot water otherwise it will not dissolve and release the active ingredients.

Once the chemical has been mixed with hot water, do not leave it in a completely sealed container. If you are using it in a spray bottle, use the chemical immediately and dispose of any solution that remains once you are done. The reaction between the water and sodium percarbonate will continue, and could build up a dangerous amount of pressure.

A sodium percarbonate solution is usually only effective for between 4 and 5 hours. After this time, it loses its effectiveness and should be disposed of.