There’s nothing worse than taking your laundry out of the washing machine and getting hit with a nasty, sour smell rather than the fresh laundry scent you were expecting. This can be caused by a variety of different issues, but fortunately, they tend to be very easy to fix. 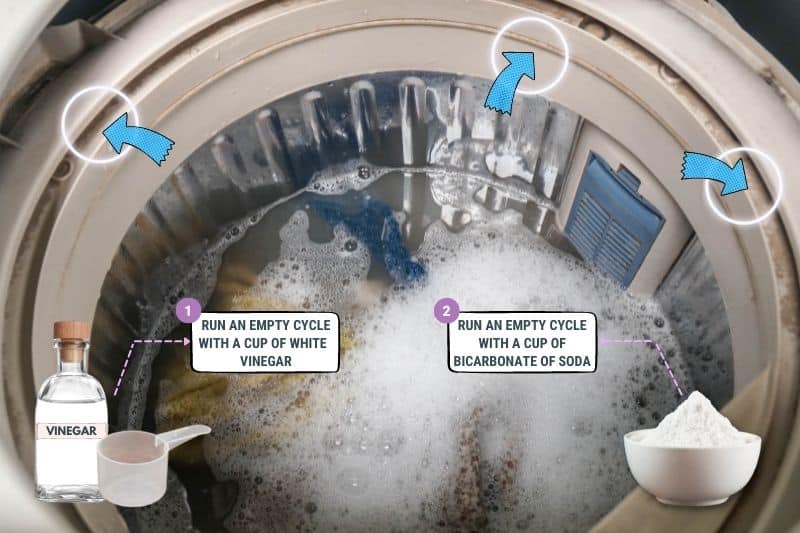 One of the most common causes of smelly laundry is that the washing machine itself needs cleaning.

Your washing machine might normally do a great job of cleaning your laundry, but between lint, low washing temperatures, hard water and too much detergent, it is very difficult for a washing machine to clean itself.

This will be even more prominent if you live in a hard water area because limescale makes for a great environment for bacteria to grow.

To tackle this issue, you simply need to deep clean your washing machine. Depending on how bad it is, you might need to run a clean (or maintenance) cycle a couple of times to achieve best results.

Some washing machines have a maintenance cycle programmed in, but if yours hasn’t, you simply need to run an empty wash on the hottest possible setting.

For an extra cleaning boost in the case of particularly bad washing machines, first, run an empty cycle with a cup of distilled white vinegar in the detergent drawer. 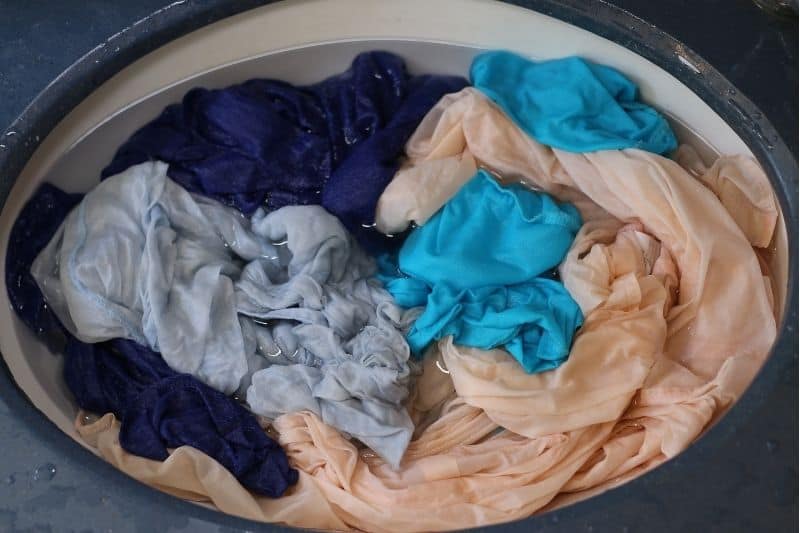 There are a couple of ways that damp clothing can lead to a sour smell.

The moisture in the garment will start to become stagnant, and this results in that musty, sour smell. To tackle this, you will need to wash the garments as hot as possible, and perhaps even wash them twice to get the smell out.

The second cause is if you have let the washing sit in the machine for too long after the cycle ends. In the same way, the moisture in the laundry will start to go stale, leading to the sour smell. If this is allowed to happen, you might need to wash the laundry a second time.

4. Too Much (Or Too Little) Detergent 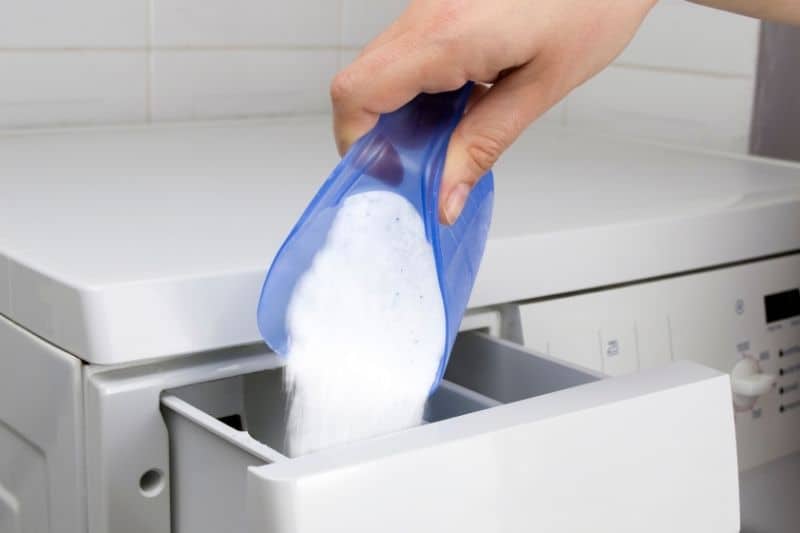 Few people actually measure the amount of detergent they are using for every wash. After using a new detergent a few times and getting good results, most people just guess at what looks about right when they fill the detergent drawer.

This might be a quicker way to work, however it can result in you using either too much or too little detergent.

If you use too much detergent, it will not dissolve during the cycle properly. If this clings to your clothing, it can cause it to feel and smell bad.

If you don’t use enough detergent, your laundry simply will not clean properly. 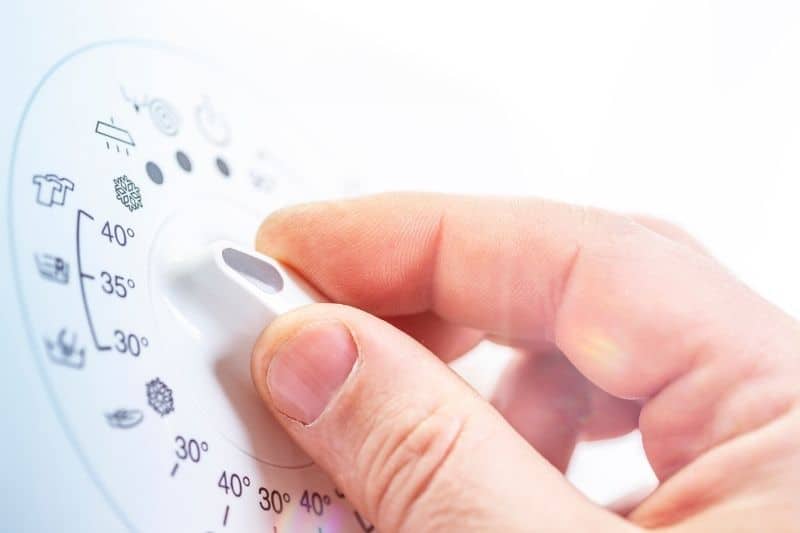 Low washing machine cycle temperatures are better for the environment, there’s no denying that. However, it can cause a couple of problems for your washing machine.

The first is that if you wash your clothing at a temperature that is too low, they might not clean properly, especially if you are using a detergent that is not designed for that temperature.

The second issue is that it will not clean the inside of your washing machine. Instead, it will allow dirt and mould to build up on the inside of the machine, leading to nasty smells.

By running a hot, empty maintenance cycle regularly, you will be able to cut through the bacteria and dirt that has accumulated during your normal, cool cycles. 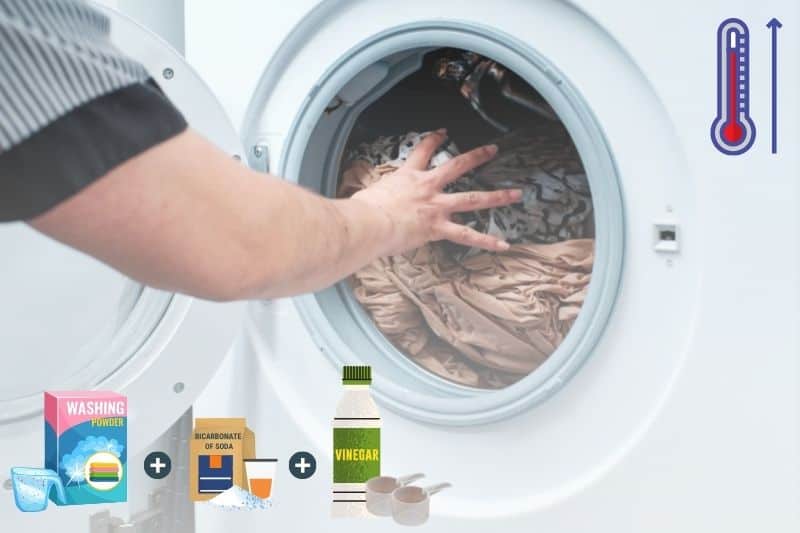 After you tackle the cause of the nasty smell, you will want to rewash the affected laundry thoroughly. Even if it was only one laundry load, split the pile in half to avoid overcrowding the washing machine.

Wash the laundry on the highest temperature setting that is safe for the garments to prevent ruining the material. First, wash the clothing with your regular detergent and half a cup of bicarbonate of soda and two cups of distilled white vinegar.

The bicarbonate of soda and vinegar will give your detergent the extra boost it needs to tackle the nasty smell.

After this cycle, wash the clothes again using just your regular detergent and your usual washing machine cycle.

As soon as the cycle finishes, either put the laundry straight in the tumble dryer, or hang it up to dry.