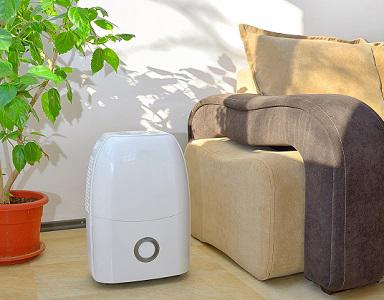 Drying clothes can be straightforward if you have the outside space and good weather conditions. However, the UK weather is often wet and cold, and people living in flats have no choice but to dry their clothes indoors. That can create a dilemma about the best way to do it.

One way is to go to a launderette, but that can be costly and may involve a long trip with wet clothes. An alternative is to drape clothes over radiators or a clothes airer, which can lead to a damp atmosphere and an untidy appearance unless you can confine this to a spare room. A heated airer, which costs 4-6 pence an hour to run, may do the job quicker but still has the same drawbacks.

Sometimes the options come down to a choice between using a tumble dryer or a dehumidifier to do the job and each has its benefits and disadvantages.

Using a Dehumidifier to Dry Clothes

The main purpose of a dehumidifier is to remove excess moisture from the atmosphere, generally to avoid problems caused by dampness, such as mould on walls and poor health conditions. However, modern dehumidifiers have a laundry mode that enables owners to use them to also dry their washing.

Manufactures claim that running costs are lower than for tumble dryers and, in cash-strapped times, some owners see it as an opportunity to remove moisture from the air and their wet clothes at the same time. The chosen method is generally to put the washing on a clothes airer in the same room as the dehumidifier.

A tumble dryer is, of course, specifically dedicated to drying clothes. However, there are decisions to be made when buying a new one:

The running times and running costs of tumble dryers and dehumidifiers vary a lot depending on the model and how it is used. However, the general view is that a tumble dryer will dry a load in about an hour while a dehumidifier in laundry mode takes about 8-12 hours.

In its defence, the dehumidifier is also drying the surrounding air although the wet washing is adding to this humidity, so splitting the timing between the two jobs is impossible.

According to one manufacturer’s figures, a dehumidifier costs 3-5 pence an hour to run whilst a tumble dryer averages 31 pence an hour. At these rates, the cost for the two machines to deal with an average load will not be significantly different. However, in practice the cost could be quite different, especially if you choose a more economical tumble dryer. Tumble dryer running costs can also be reduced by running overnight at Economy 7 rates although noise levels may prevent this depending on each machine’s location.

Other Things to Consider

As well as cost, maybe other factors need to be considered. One is the health of the occupants because some people are adversely affected (dry throats and eyes, etc.) by the dry air that dehumidifiers produce, while others suffer from excessive damp.

Tumble dryers can over-dry clothes and cause them to fade and shrink, whereas dehumidifiers do not have that effect. This problem can be solved if the dryer has a sensor, since this will switch the machine off once the required level of dryness has been reached.

Both types of machine will generate some heat and can therefore offset heating bills to some degree in the rooms where they operate. This obviously has no relevance if the tumble dryer is out in the garage.

As with many things, it probably boils down to personal preference and some people may use both types of machine for their original purpose. In this case, you can still save money by doing the following:

Any cookies that may not be particularly necessary for the website to function and is used specifically to collect user personal data via analytics, ads, other embedded contents are termed as non-necessary cookies. It is mandatory to procure user consent prior to running these cookies on your website.